Denali CTP 1 has been around for almost a week now, and I would like to take the opportunity to highlight some of the improvements and changes being introduced in usability area. This review is accurate to the best of my knowledge and is the results of  few hours playing with the tool, watching some demos and reviewing some of the documentation available – that means use with caution. 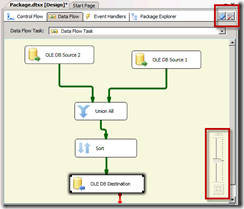 New design surface. A slicker look and feel with a friendlier zoom functionality that is always visible. While zooming in and out is quicker now, one thing I am missing is the old functionality of the little pane in the bottom right corner (Does anyone know how it was called?) that allowed scrolling across the entire design surface with a single click– it came very handy to navigate control and data flows that have lots of objects. 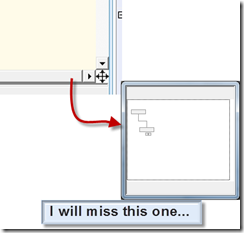 New SSIS toolbox. This is a new toolbox pane used only by SSIS and its items have a flashy look 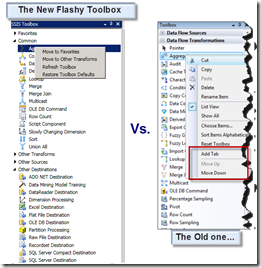 and are organized into a number of pre-defined groups similarly to earlier versions. However, something that seems to be missing from the previous version is the ability to create additional custom groups of items or Tabs – Not a big deal if you asked me, but something you may miss if your way of organizing toolbox items do not align with the one provided.

Editor? In case you don’t, it used to get in your way when trying to edit data flow components after breaking downstream changes were detected. I hated that editor as none of its 3 options did really help you, and it would get in your way again if you picked the wrong option. As far as I can tell, now you can: 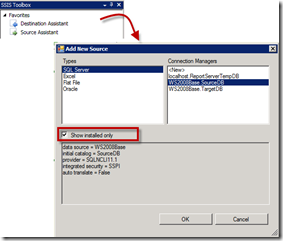 Destination and Source Assistants (data flow). Just a convenience feature that allows saving few clicks when adding destinations and sources to your data flows. It also allows you to see the connection types for which you have drivers install if you wish. 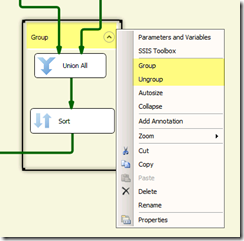 Grouping of control and data flow items. Now, you can select multiple items and group them. This is a design time only feature that may come handy to keep packages with lots of tasks and components visually clean and organized. It has no run time effect.

Undo and Redo. This long overdue functionality finally made it into SSIS. Now you can use CTRL+Z or CTRL+Y to undo and redo latest changes – I don’t know how deep it goes, but I can say it goes beyond the last save operation.


Multiline Annotations. Another minor but annoying issue from earlier versions. No more jumping to text editors or CTRL+ENTER in order to get annotations in multiple lines of text. Just hit enter

While this new version has some notable improvements in this area, the most promising enhancements are in server components side, the overhaul of the parameterization and deployment processes, and the yet to be released data linage and impact analysis. Stay tuned for more details on those areas.
Posted by Rafa Salas