Recently, I was involved in a discussion about how to get the SQL Server based configurations work using the indirect settings; since I have not had the chance of getting into it; I thought it would be helpful to share a technique that yields similar results.

This post describes an approach for implementing SQL Server based package configuration that uses an environment variable to facilitate the deployment of the packages onto different servers without having to modify the packages. I have used this technique for a while, and I think, it may be used as an alternative to the indirect method described in BOL.

Let’s supposed we have a package that has a connection manager called ‘Source’, which has the connection information of the source DB where the package is trying to pull data from.:

The next step is to bring the configuration wizard and create an entry to set the connection string of ‘Source’ connection manager; it should be something like: 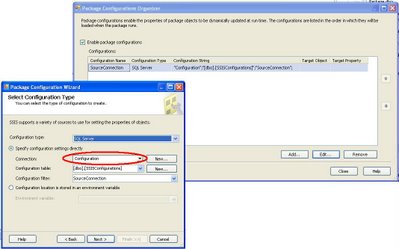 As you can see, this package configuration uses 'Configuration' connection manager to get acces to the Configuration table. On this example the name of the table is SSISConfiguration. 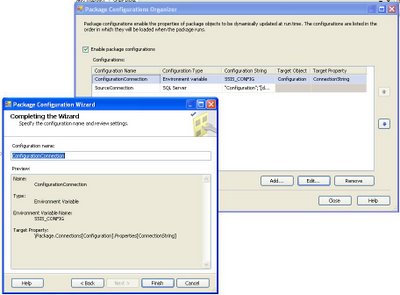 By doing this we have turned the package into a very portable one. Going forward, all we have to do, when deploying the packages into a different server, is to create a variable called SSIS_CONFIG in that server; set the proper connection string as its value, and make sure the rows in the configuration table have the right values.

Just in case, the value for the SSIS_Config is just a connection string that can be consumed by the connection manager; something like:

I have successfully used this approach using an XML file instead of an environment variable; which comes handy when the use of the second ones are not an option. Please feel free to post your comments.

I hope you find this example helpful.

Update: Since I receive a lot of request asking for a copy of the package, I have make it available in my SkyDrive:


you would have to modify the connection strings to point to DBs that exists in your environment.