One thing that caught me off guard as I was trying to use Power Query against Power BI for Office 365 was the fact that there are 2 versions of Power Query. This actually seem to have confused at least one other person already, so here is some information in case you face the same situation: 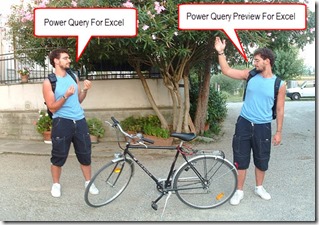 
How are they different?

Version 1.x is the first release of Power Query the one that reached General availability on July 8 2013. This means, among other things, it is safe to run it in production environments. This is also the “standalone” version meaning it does not have the options to connect and share Queries via Power BI for Office 365 Version 2.x is  the the so called “corporate” which means has the options to interact with Office 365 Power BI sites. It is important to note that as of this date, this version is in the  PREVIEW stage which is some sort of beta period where features and functionality are still being finalized  and its use in production environments is not recommended.   So, if you are trying to use Power Query for Excel against Power BI for Office 365 make sure you have the 2.x version!